Haldwani is one of the biggest business centres that come under Nainital district of Uttarakhand state. It is also called as the gateway of Kumaon. Haldwani along with its twin township with Kathgodam comes to form a Haldwani-Kathgodam municipal board in Nainital District. 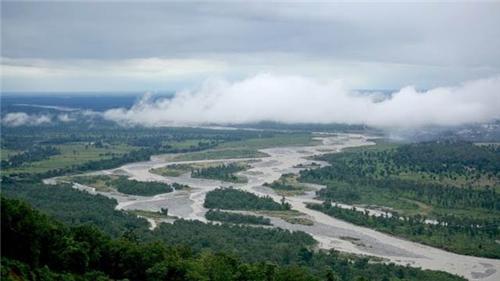 Haldwani is also a notable place due to the GB Pant University of Agriculture and Technology, Sidgul (Pantnagar) and of course for the newly built Sushila Tiwari Memorial Hospital (Uttarakhand forest hospital trust). Haldwani also houses high standard that is combined with low expenses as well as devoid of elitism that are the common features of a residential schools on the hills of the Uttarakhand.

The famous Pantnagar University lies to the south of the Haldwani city at Pantnagar. To the east of the city, one will find the Gaula River and to the west the fertile agricultural region of Lamachaur and Kaladhungi. The world famous Jim Corbett National Park merges with these agricultural regions.

A Brief History of Haldwani

Haldwani is the one of most populous city in Uttarakhand. In the local dialect i.e. in Kumaoni, the place is named as “Halduvani” as the tree named “Haldu” (Haldina Cordifolia) was found in abundance prior to deforestation for agriculture and settlement. The increase in the population of Haldwani has led to the formation of many suburbans like Malli Bamori, Mangal Parao, Jagdamba Nagar, etc.

The Chitrashila Ghat, the venerable Hindu cremation ground is situated at Ranibagh which is to the north of Haldwani. During Makar Sankranti (on 14-15 January) every year, a fair called Uttarayani which is also called as Ghughutiya in Kumaoni is held here.

However, today, the city is occupied by people belonging to all religions who have migrated to the city and settled down apart from the natives, the Kumaonis and the Garhwalis. This could be found from the architecture, culture, festivals, clothes and cuisines of the city. Though Hindi is spoken by the majority of the people, Urdu, Punjabi and Kumaoni are other languages. It is to be noted that people belonging to various religions are living in perfect harmony and various festivals are celebrated throughout the year.

Today, Haldwani is an important commercial hub as it is home to largest vegetable, fruit and food grain markets in Kumaon and along with Garhwal serves as a base depot to transport goods to the hills. The irrigation for agriculture and drinking water supply to the city is done from Gaula River.

Haldwani city is located 29.22?N and 79.520E and has an average elevation of 424 metres i.e. 1,391 feet. It is to be noted that Haldwani is located on Bhabhar, a place where the mountain rivers submerge and re-emerge as Indo-Gangetic Plains. Over the years, it has also remained as a trading post and a connecting hub for Kumaon and other Indo-Gangetic Plains.

Because of its location, summer in Haldwani is not very hot and the maximum temperature recorded is 370C and the night is very pleasant. Due to the location of the region especially at the foothills of Kumaon, Himalayas Mountain Range, the temperature goes down up to -30C. The winter season is from October to February and brings cheers to all. The monsoon season of Haldwani is from July to September and is very beautiful.

Click Here for More Details on Geography of Haldwani

Haldwani is situated on a strategically important location on the foothills of Himalayas. Along with that the city has a pleasant climate and rich flora and fauna. All these make the place an ideal tourist spot. There are many places in and around the city that offers wonderful hikes and treks, green and serene trails, picnic sports and refreshing sightseeing. Some of them are Chhoti Haldwani, Kaladhungi, Kathgodam, Gaula River Belt, Jim Corbett Village, Bhowali, Lal Kuan, Pant Nagar and Rudrapur.

Today, Haldwani is a place where people from different religions and culture live together in harmony. Some of the festivals celebrated in Haldwani are Uttarayani, Chaitri Navratra, Baisakhi, Diwali, Dussehra, Eid, Christmas and Holi.

People of Haldwani are known for feasting their palate. Majority of the recipes are adapted from the Kumaon hills which are known for its food. Some of the most popular and delicious food of the region are Papad Ki Sabji, Gaderi Ki Sabji, Churkani, Gathi, Bhatt Ka Jaula, Lasun Ka Lur, Bal Mithai, Kaapa Bhaat, Bhang Ki Chatnee, Peenalu Ki Sabji, Dhai Ka Jaula, etc. Though these are pure Kumaon and Haldwani recipe yet are easy to make them.

How to Reach Haldwani

By Road: Haldwani can be reached from Delhi by road via Moradabad, Rampur and Lalkuan which is some 368 Kms. From Nainital, it takes 35 kms to reach Haldwani by road.

By Rail: From Delhi, it takes 365 kms via Ramnagar, Kaladhungi and Kashipur. There are some direct rail connections from Delhi, Amritsar, Rampur, Lucknow and Howrah.

By Air: Haldwani is closest to the Pantnagar airport which is some 35 kms.