Haldwani has developed into a colourful bouquet of populations, dialects, cuisine, languages, music and fairs and festivals. All these are the sum total of the culture of the region. The original inhabitants of the area were Kumaonis and Garhwali. In the early 1970s several migrants from Punjab settled here in what was called the Terai region. Thus, there is a mixed population which has given rise to its rich and varied culture. 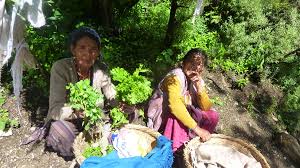 Since the original people were from Kumaon and Garhwal there were a number of dialects and terminologies that were typically of the Kumaoni lingual origin. Along with these is the robust culture of the Punjabis that seems to have permeated the entire region so much so that a mixture of the Punjabi language interspersed with Garhwali terminology is the lingua franca of the area. This admixture of languages commonly spoken in Haldwani and the surrounding areas is generally referred to as Pahari or ‘language of the hills’.

Men and women wear thick woolen clothes. The women’s clothes are comprised of full skirted billowing ghaghara and a full-sleeved collared shirt usually plain white or in a single tone. However, the formal ornate and elaborate veil is worn by the women only on formal occasions. It is brightly coloured and is called the “Rangwali Picchora”. It has elaborate colourful lace work which covers the fore-head. This ‘Picchora’ is given to every bride and worn on rare occasions.

The attire of the men is also quite distinctive with long coats worn kurta pajamas. An indispensible part of this attire is the colourful wool cap that adorns the heads of almost all the men. On ceremonial occasions they may add a colourful silken handkerchief to their attire.

Haldwani had for long been the cynosure of all eyes as all kinds of developmental plans began emerging around the area. The people of Haldwani began making demands from the Uttaranchal government to focus its attention on Haldwani and declare it as a district headquarters. This was in deference to the fact that Nainital had already been the focus of all forms of development activities and progressive measures to attract tourist revenue as also investments.

However, when in 1995 Udham Singh Magar was declared as a district having its headquarters in Rudrapur just about thirty kilometers from Haldwani. Thus, the population of Haldwani be it Hindu, Muslim or Sikh all had made their vital contributions.

Music and Dance in Haldwani

The popularity of the language is reflected in the musical preferences of the local population. The mystique of the haunting Pahari music of the Kumaoni hills has its own attraction as one is transported to the shepherds’ slopes on the lilting notes of the traditional Garhwali folk music. Also popular are the ‘desi’ or local folk songs that are a caricature of the film-based music as well as the compositions of several young aspirants. There is also the rock and pop music of the English language along with the vibrant Punjab ‘dhol’ making its own place.

Thus, while the musical instruments of the Pahari folk music are ‘Turturi’, ‘Dholki’ and the ‘Hurka’ the Punjabi folk musical instrument is invariably the rhythmic dhol. The folk dances of the region are also typical like the ‘Chholia’ a typical ‘Nritya’ or dance form enacted in the form of a war dance on traditional lines with the necessary props of the sword and shield. Then there is the ‘Jhora’ dance which is a typical group. Another dance form of the region is the ‘Chhapeli’. These dances performed to the tune and music of folk songs are more or less devotional in composition. These folk renditions encapsulate the lives of heroes of bygone eras or are based even mythological themes. Many of the dance forms are representations of romances of simple hill folk and many a performance also has a moral message to teach.

Besides these the resonance of the Bhangra and Gidha performances typical of Punjab are vibrant, energetic and dynamic renditions that keep the feel tapping.

Fairs and Festivals of Haldwani

The population of Haldwani celebrates all national and local level celebrations. Diwali and Eid, Gurpurabs and Christmas are all celebrated with equal pomp and show. All the religious institutions like the temples and mosques as well as the gurudwaras and churches, all are decorated elaborately during all these festivals. The administration takes special measures to ensure that the entire duration of the festivals is a happy occasion for all and there are no untoward mishappenings. This is also why special arrangements are made all around for safeguarding the population.

Another major event celebrated all over Haldwani is the ‘Uttrarayana fair’. It is referred to as the ‘Ghughutya’ in Kumaoni and is often celebrated on Makar Sankranti or 14th of January every year. This fair is held at the Chitrashils Ghat at Ranibagh which is just about eight kilometers in the Northern direction from Haldwani.