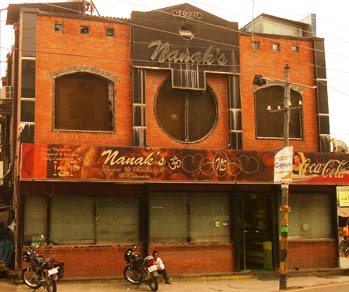 Haldwani sits on the confluence of the hills and the Gangetic Plain and similarly the food of the region is also a mixed bowl of the simple hill fare and the fiery spicy Punjabi cuisine. The food of Kumaoni is known for its special flavours.

The Kumaoni dishes are typical cold-weather dishes. The traditional dishes here carry authentic flavours of the herbs and spices gathered locally. The concept of hot and cold foods holds sway over the entire range of vegetables, fruits, dry foods and all kinds of herbs.

Some amazing dishes of the Kumaoni kitchens are delicate enough to make the taste buds remember the taste for ages. There are several delicious dishes like Papad sabji, Alu Gutuk, Lai ka saag Ras Bhat that are a mouth watering treat for anybody trying them.

Simple fare without much chilly or oily base there is ample scope for the flavors to permeate well into the preparation and subsequently into the taste buds of the individual. The Kumaon hills are a foodie’s delight especially at Haldwani where roadside kiosks abound in finger-licking snacks which are mostly vegetarian.

Among the winter edible delights there are the specialty foods like ‘Lason ka lur’ and ‘Bathue Ka Paranthae’. Then there is the Madwe ki rote and Bhang ki Chatnee. Gaderi Ki Sabji and Gauhat ki daal are the two delectable mouth-watering tasteful delights that have held the hill people agile and healthy in the foothills of the Himalayas. One amazing sweetmeat preparation that has made its way through folklore to current times with only slight variations is ‘Bal Mithai’, a sweetmeat. Almora swears by. Earlier it was made of Khoya or did over low heat.

This ‘Baal Mithai’ is even sold without the coating of sugar balls. This brown fudge is famous all over the region and anyone going to and from Haldwani is always requested to get some packed from these.

Punjabi cuisine is known to have a zing that has attracted many a plate. The rich gravies and curies of vegetarian Punjabi dishes have an aroma and flavor all their own. There have been many instances of the tourists licking their fingers as they ate the butter rich preparations of Shahi paneer, Pindhi chana, sarson ka saag coupled with makki ki roti or even the typically Punjabi Chollae Bhaturae, tikki and dahi Bhalla or papdi chatt. The universal ‘paani poori’ or ‘gol gappas’ are unique here at Haldwani because certain typical Punjabi flavours have been added to the multiple types of sweet sour and bitter waters that areas served along with this amazing snacks.

Thus, Punab, kumaoni and Garhwali tastes come together in Haldwani in an amazing richness of flavours that are rare to find any place else.

Located about four kilometers from the Railway Station, Kathgodam and two kilometers from the Haldwani Bus Stand and located on the Nainital Road from Haldwani. The food served is mostly vegetarian with specialization in north Indian Continental as also Chinese.
Address: BotiaParav, Haldwani
Ph. No: +91-5946-320578

Just about two kilometers from Haldwani Bus Stand and its Railway Station on the Nainital road to Haldwani. The cuisine served at restaurant is vegetarian north and south Indian alongwith Chinese and Continental dishes. Their specialty is Bengali Sweets.
Address: Padmavati Tower, Botiaparav, Haldwani
Contact No:+91-5946-282228 and mobile +91 9897046228

This is a spirituality restaurant that serves vegetarian fare for both Indian, Chinese and Continental. This is Haldwani premium Chinese restaurant. Located at Ranibagh, in Haldwni. 2.5 Km from Kathgodam Railway Station situated about seven kilometers from the Haldwani and Bus teriminus on Haldwani Nainital Road at Haldwani.

Located at Botiaparav in Haldwani on the Nainital Road, it is just 2 kilometers from the railway station at Kathgodam. The restaurant serves vegetarian, South Indian, Chinese food.