Sports have always been a major indulgence amongst the people of Haldwani. Almost every street in Haldwani is filled with youngsters playing a different kind of sport. Children in this city start playing cricket or football at a very early age. 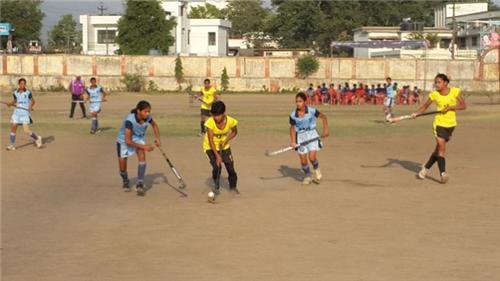 Sports shops are easily accessible and children get good quality sports goods from these shops. Not only cricket or football, but we can see the young generation of Haldwani indulging themselves in sports like boxing, swimming, badminton, hockey, karate and table tennis. Snooker and billiards are finding their place amongst other sports and many kids have started finding their passion with these sports. Few of the people who are not able to afford expensive sports goods take up sports like cock fighting and kabaddi. But generally, the people of Haldwani have a passion for sports and because of that a few societies in Haldwani are working hard for the betterment of the youngsters who they deem to be talented in sports. Haldwani, being a hilly area has amazing views. Playing any sport in this city with beautiful mountains in the background can never get you tired.

Haldwani also hosts many tournaments. The North India Open Snooker Tournament was held in Haldwani in 2013; plans are being made to host the 2014 Snooker Tournament over here as well. The winner of 2013 tournament got a cash award. Because of this, snooker gained more popularity in recent time and it also acts as a stress-buster for youngsters who enjoy the game without worrying about the heat and sweat.

Since cricket is a famous sport in mostly all the cities of India, how can Haldwani be left behind? There are many cricket academies in Haldwani and many cricket clubs as well. In Haldwani, cricket is played professionally also and also on the streets.

Karate is being explored as a sport these days. Not only does it help the children take out time to exercise and indulge in a sport, it also helps improve self-defense. Women and girls have started taking keen interest in karate and have gained a lot of self-confidence from this sport. Karate Championships are being held in Haldwani from time to time. The last Karate Championship was held in 2013 at Shivalik International School, which was supported by ‘Karate Point’ and ‘Martial Art India’, and was inaugurated by the Mayor of the State himself.

Hockey cannot be ignored in Haldwani. Being the national sport of India, Hockey has helped youngsters find patriotism in their hearts as well. The youngsters feel a sense of pride when they are playing hockey. Hockey Championships are held here as well and much enthusiasm is seen amongst the locals as they cheer for the participants. The National Sub-Junior Women’s Hockey Championship was held here this year and people from nearby cities also had come to watch this interesting sport being played.

Badminton is another sport which is very interesting and is especially popular among young women and girls. People play it on the street without a net or boundaries.

This Academy is part of the Sacred Heart School and helps give training and coaching to students on this field. Many games of ricket have been played here and VIPs from different walks of life have been invited to view those matches. This Academy is open from 3 pm to 6 pm every day except Sunday.

A sports stadium of international standards has been sanctioned to be opened in Haldwani. It will be built on 36 acres of land. The Finance Commission has sanctioned 25 crore rupees for the construction of this Stadium, which will supposedly be the first of its kind in Uttarakhand. According to the ministers of Haldwani, this project should be completed within 2 years.

Till the time the International Sports Stadium is not constructed, the Haldwani Stadium will stand tall. Located at the road to Nainital, this huge stadium allows people to play many different sports like cricket, football, basketball etc. This Stadium also has a racing track and gives training to runners. Runners are trained well for marathons and people have witnessed quite a few marathons being held in this Stadium.

The Viluna Gym also has a Billiards and Snooker room. This gym is doing a good job in promoting these sports and provides all the equipment of all the sports to the customers.

It is a cricket ground in Haldwani which is part of the military. Only cricket is accessible to the civilians.

This club is almost similar to the Haldwani Cricketers Club but lacks in facilities and motivation.

Headed by its president Shri Praful M Patel, this Association has taken football in Uttarakhand to a new level. It promotes football and has various clubs as part of the association. It provides coaching and education to all its students. Youth Development is one of their mottos. It provides many opportunities to the youth of Haldwani and adults alike to play soccer as recreation as well as to play soccer at an elite level.

Haldwani is a city who is passionate about sports. Taking advantage of this, there are plenty shops over here that are selling sports goods. Some of the famous sports shops in Haldwani are Ashu Sports Shop at Bhotia Parao, Adarsh Sports at Sadar Bazaar, Balbir Sports at Nainital road and Shivam Sports at Sadar Bazaar.